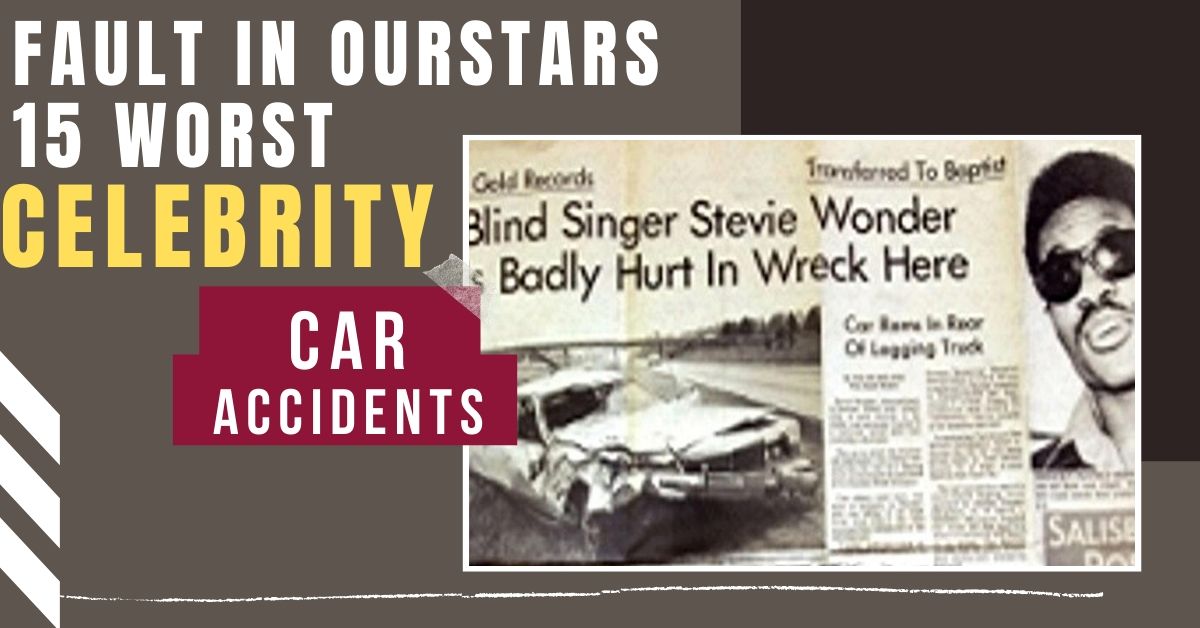 We adore our celebrities. We look up to them, follow every little detail of their lives, coo over their successes and can generally entertain ourselves for a few minutes by reading upon them. And since we feel so invested in their lives, it comes as a shock to us when something terrible happens to them. Nothing can be more jolting and upsetting than a car crash. Minor accidents are distressing enough but car crashes can prove to be life-altering, or even potentially fatal.

Here is a list of 15 celebrities who were in car crashes. Some of them survived to fight another day but some, unfortunately, did not make it.

Stevie Wonder is a behemoth in the music industry. The singer-songwriter is also a record producer and is loved by millions across the world. But the world came very close to losing a would-be legend in 1973. On 6th August that year, Stevie Wonder met with a horrifying car crash when his car, driven by his cousin rammed into a truck. The 23-year-old Wonder sustained grievous head injuries. Though he survived the crash, he permanently lost his sense of smell and his sense of taste (temporarily). He has often spoken about how lucky he is to have survived at all.

Rachel Bilson shot to stardom for her role in the hit US series the OC. But Rachel too had a close brush with death in her early youth. By her own admission, she had been dating the wrong kind of person and keeping an unpleasant company and this accident taught her to take stock of her life and contemplate life. She was only 16 when she had a near-fatal accident. Their car had been speeding and had collided headlong with a truck on the Pacific Coast Highway. Their car was so mangled that parts of the metal had to be cut out to extract them. Rachel Bilson had suffered intensive injuries that resulted in her being in a come for a few weeks.

Actors Jennifer Grey and Matthew Broderick had dated briefly in the 1980s. In 1987 they were on a holiday in Ireland when they were involved in a deadly car accident. Matthew was behind the wheel and later he had claimed that he had to swerve suddenly because of bad weather but many believe that he was driving on the wrong side of the road. Jennifer Grey went on record to say that she was terribly shaken because she had been witness to the deaths of a mother and daughter and that made her look at life differently.

Her accident happened when she was on a tour bus and it crashed (1990). The injuries she sustained resulted in paralysis. But miraculously she recovered from it. But the road to recovery was long and arduous. Several surgeries and years of physiotherapy drained her mentally and psychologically.

The popular comedian and actor were in a car that lost control and plunged down an embankment in 2019. The car accident resulted in Hart sustaining terrible back injuries that required surgery to remedy. He did not rush his recovery, took his time, and was fortunate enough to make a successful reentry into Hollywood.

In 2000, Halle Berry ran a red light, slammed into another car, and then fled from the scene. But the collision caused a severe gash to her forehead and at the healthcare facility, she needed 22 stitches to staunch the bleeding. For violation of traffic rules, she very nearly ended up in jail but her lawyers claimed that the injury to her head had triggered a loss of memory and she got off with a reduced sentence of community service.

Morgan Freeman nearly had a fatal accident in 2008. He too had to be cut out of his car that was completely leveled. He hurt his hand in the accident and the resultant nerve injury caused him much grief for years to come.

In 2015, he was in yet another accident even though he did not hurt himself. The plane he was in was compelled to make a controlled forced landing.

Caitlyn Jenner’s accident is still shrouded with mystery. She was probably not under the influence of any drugs or alcohol when she was driving, maybe she was just distracted but her car rammed into another car and forced it to swerve into the oncoming traffic. This resulted in the death of the driver in the other car. The children of the woman filed a case of wrongful death against Jenner who had herself sustained minor injuries.

Tracy Morgan’s tour bus crashed into a Wal Mart truck. The driver of the truck had been on duty for 28 hours and had been speeding. Tracy Morgan took his time getting over his injuries before he made a comeback to acting.

The glamourous host of Top Chef severely injured her pelvis and arms when the car she was in plunged 40 feet into an embankment. She was only 14 years old then and still proudly sports the scars of the injury. She has been a vocal opponent of body shaming and has urged people to flaunt their imperfections.

I 2001 Niki Taylor, the famous supermodel was in a horrific car crash that mangled her spine. To this day the steel rods that hold up her spine have not been removed. The very fact that she survived the accident is a miracle.

Arnold Schwarzenegger and his son injured themselves in a motorcycle accident. Fortunately, none of them received ghastly injuries. However, Arnold did require 15 stitches to his lips.

The star of the Fast and Furious series died in a car crash in 2013 when his driver lost control of the car and it crashed.

This is a tragedy the whole world is familiar with. The princess was fleeing from the paparazzi and her car collided with the wall of a tunnel.  The crash resulted in her demise.

The beloved and enigmatic Hollywood star of the golden era dies in a car crash when her car plummeted down a slope. Her daughter too was in the car but only sustained injuries from which she made a complete recovery.

Car or vehicular accidents can happen to anyone. Even if you are a cautious driver and a stickler for traffic rules, not everyone is like you and you could be injured because of the negligence of others. In worst-case scenarios, you could lose a loved one.

At Claim Settlement, our network of lawyers have 20 years of experience in handling personal injury and accident cases and has recovered millions of dollars in settlements for our clients. Our initial consultations are absolutely free and you don’t pay until our networks of lawyers have procured you the compensation you deserve. If you have suffered an injury or been in an accident call us at 1-833-892-5246 for a free consultation or e-mail us at claim@claimsettlement.ca

Claim Settlement is here to help guide you through every step of the process. Don’t hesitate to contact us today for free claim review.

Get The Money You Deserve!