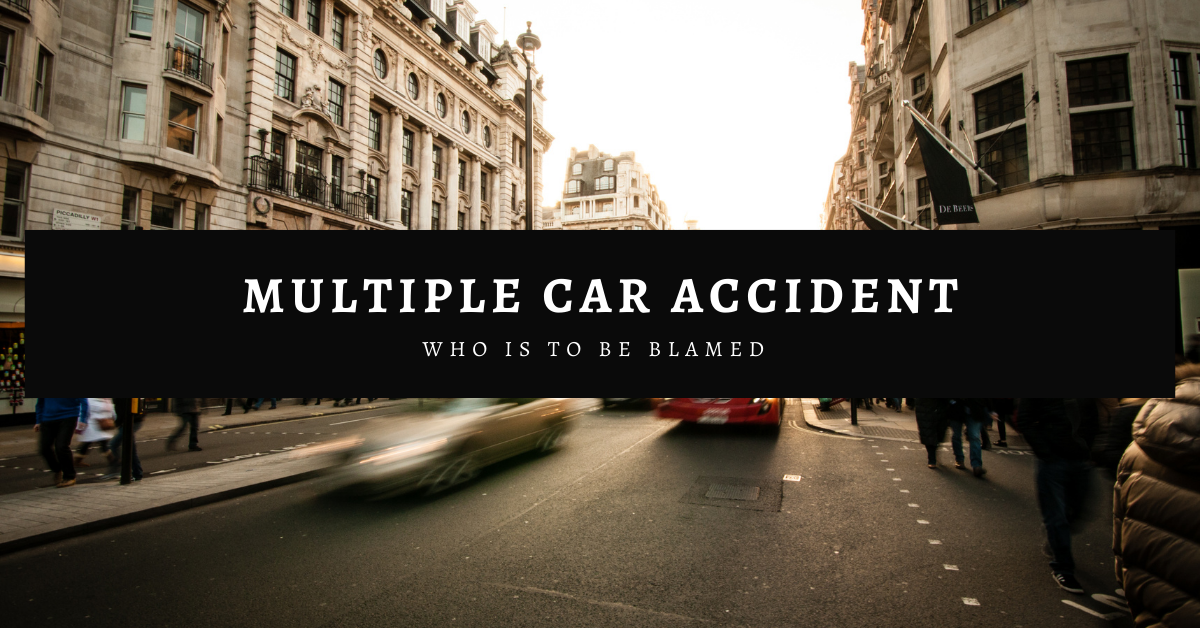 Multiple car accidents are mostly observed on highways where many vehicles are speeding, and if one car rams into another it creates a chain reaction of accidents. These accidents have disastrous consequences and can affect anyone involved in it- from a cautious driver to a pedestrian. Let us understand the primary causes of these accidents.

Why do multiple car accidents occur?

Multiple car accidents usually occur when one or more cars face a problem such as failing to brake on time and losing control. They might crash into each other, causing the cars behind them to brake as well and hitting the vehicles in front of them. These can also occur if there is an obstruction on the road and the car stops or lowers its speed. But the cars behind it fail to do so and run into the cars in front.

While driving, the driver may be distracted. As a result, the car can crash or may break suddenly, causing the cars behind it to crash into it. The distractions causing multiple car accidents are:

The road ahead must be our first priority while driving to avoid accidents.

Another important cause of multiple car accidents is the driver’s fatigue.  This may be caused due to the driver getting sleepy or tired while driving. As our daily lives are busy, many of us do not get adequate sleep. So, when you are sleep deprived your body lacks the energy and does not function properly.

Fatigue and drowsiness can also be the side effects of certain medications.

Thus, fatigue can cause you to doze off for a second while driving. This distraction for even a second can make your car change a lane accidentally, and hit another approaching vehicle. This can make the vehicle behind you crash into the ones in the front, causing a disaster.

Accidents due to the driver’s fatigue are caused mainly during the summer season, where the scorching heat may have exhausted him or her. Due to a lack of energy, the driver loses focus and hits another car. These types of accidents are observed mostly during long road trips.

Bad weather conditions are unsafe for driving, some drivers just won’t stop speeding. Similarly, driving on icy and snowy roads is risky as well. But for drivers who consider themselves professional racers – driving at full speed seems normal on these treacherous roads.

As a result, fatal accidents occur where multiple drivers are injured and killed.

Reckless driving includes activities such as:

Some drivers even start competing with one another and race on the highways. All these irresponsible activities put other vehicles and pedestrians on the streets at risk. Some cars may even crash into shops located by the roads. Reckless driving is one of the major causes of multiple accidents in Canada.

Who is to be held responsible for such an accident?

When an accident involving only a few vehicles occurs in an urban location, it is easier to identify the negligent driver. Drivers who ram into the cars in front of them are likely to be found responsible for these types of collisions.

If the weather was not suitable, the drivers who had not adjusted their speed accordingly will be held liable. Also, drivers who were found driving close to another vehicle will be questioned. This is because of the Highway Traffic Act, R.S.O. 1990, c. H. 8. The law states that following another car while driving is an offense. The law further states that the driver who intends to turn right or left in an intersection has to do so after checking the road carefully and signaling that they will turn.

Rear-end collisions are the most common type of accidents involving multiple cars. The driver at the rear end is often held responsible. According to the Fault Determination Rules mentioned in the Insurance Act of Ontario, there are some rules that determine who is at fault in these type of accidents –

What to do after a multiple car accident?

After such an incident, your first priority is to make sure other passengers in the car are alright. Do not get out of the car. In a multiple car accident, you may not know if the accident is over. This means that if you exit the vehicle, you may be hit by another car on the road. So, fasten your seat-belts and call the emergency number or anybody for help.

After the paramedics have arrived and injured people are taken to the hospital, it is time to collect evidence about the incident. Try to take pictures of your car and other vehicles involved in the accident. Try to find eyewitnesses and gather as much information as possible. Takedown their phone numbers. Do not forget to take pictures of the number plates of the vehicles associated with the accident.

Note it all down as it will be important when you seek compensation for your loss from the drivers at-fault. The best way to go about is by hiring a personal injury lawyer to prepare the case for you. If you require medical care and therapy, they will connect you with the best health care professionals.

These cases are complicated and it might be difficult to obtain the compensation you deserve without professional help. So, after you have recovered from your injuries, contact a personal injury firm at once without wasting any time. They are experienced in handling cases like this and will assist you in getting your claim settled successfully.

At Claim Settlement, our network of lawyers.. we connect you with have over 20 years of experience in handling personal injury and accident cases and have helped clients recover the maximum compensation in claim settlements. Our initial consultation is absolutely free and you don’t pay your lawyer until you receive the compensation you deserve. If you have suffered an injury or been in an accident call us at 1-833-892-5246 for a free consultation or e-mail us at claim@claimsettlement.ca

PrevPreviousHow To Recover From Soft Tissue Injuries?
NextWhat Should You Do If You Have Been In A Pedestrian Accident?Next

Claim Settlement is here to help guide you through every step of the process. Don’t hesitate to contact us today for free claim review.

Get The Money You Deserve!